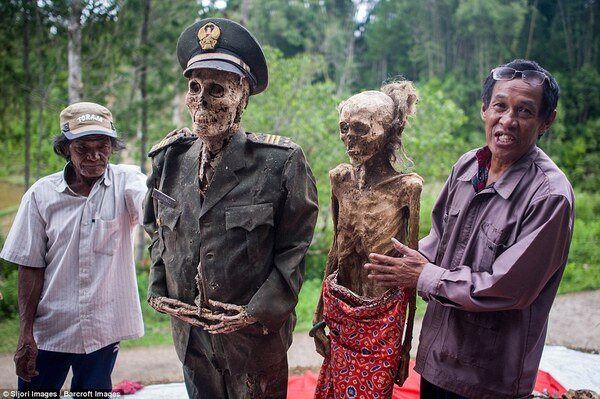 Sometimes we wonder how amazing and wonderful the world we live in and we urge to explore them. We come across variety of wonders and Incredibles. Culture is an inherent part of the society we live in. It differentiate form each to another. In this article, we will focus on six such incredible festivals that are relevant to different cultures in the world.

Firstly we are going to talk about the infant baptism ceremony. This child jump ceremony is a regional festival in Spain. This festival take place 60 days after Easter Sunday.  Most importantly, this festival is known to be expanded 1600 years ago. Moreover, The scene shows men dressed as monsters in frighteningly colorful costumes, jumping over the bodies of children lying on pillows and mattresses on the streets, and it is reported to be a very funny occasion. It wishes the children’ healthy recovery.

The second festival is done by the Torajan people,atribal live in Sulawesi mountain in Indonesia. They celebrate this wonderful resurrection of ancestora in honor of their dead relatives. These tribe value death more than birth and marriage. If a family member dies while away from home, they will bring thw body somehow. They held this festival to commemorate their relatives for a week. The first step is to remove the bodies from burial grounds. The bodies are then washed and cleaned. At the funeral, the deceased’s relatives are stripped of their old and worn out clothes and taken home in their new clothes. They are given foods and drinks which they liked when alive. Later, at a ceremony called Manene, all the living with the dead pose for family photos.  At the end of the ceremony, buffaloes are killed, their meat is shared among the villagers, and the dead relatives are buried in the graveyard.

The third festival, called Naga Panchami is celebrated in the months of July or August. People worship the serpent god and poisonous snakes take part in this festival. This tradition has been doing since ancient times in India. On the fifth day of Naga, devotees offer offerings to idols bearing the image of snakes.  These offerings include milk, fruit, and flowers.

The fourth festival was started as a new ritual about centuries ago in order to refrain from epidemic. Colorful processions symbolize the display of idols and children are carried on poles. The most important ritual is to bake thousands of buns.  The surface of the bun is sealed with a Chinese word meaning ‘peace’. The three-day event concludes with a bun tower climbing event.  There is fierce competition among the competitors to climb the 20 meter tower covered with buns.  The buns are pasted on the tower and the climbers must save the maximum amount of buns

The last festival is funny to hear. A carnival in search of worms held in England in great way. The aim of the event is to capture the maximum number of worms in 15 minutes from a section of the field reserved for them in groups of three. This competition is held with the full of active among participants.