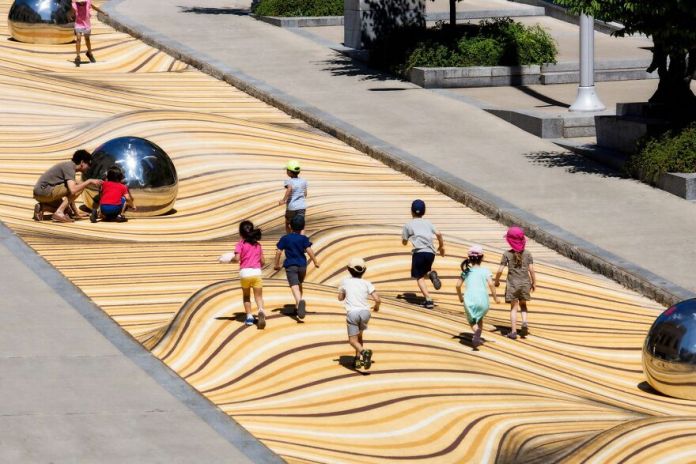 The Moving Dunes in Montreal Canada was created by the Canadian architecture firm NOS. This seems like a fake visualization and it can be seen as an aberration of people who are walking on this. But it is a real creation with certain development capacity. The dunes seems like bend from the viewer’s perspective. However it forms a deceptive path and there’s a view of sand in a dessert.

According to the concept emerged at the exhibition of the Montreal Museum of Fine Arts in 2008 and this was created with the title of “From Africa to the Americas: Face-to-Face Picasso, Past and Present”. This was painted in sandy colors and chrome spheres. The Moving Dunes is almost a mind mending illusion as sands are dancing when the people are walk down on this street.

The great mindset and the architect behind this Moving Dunes is Charles Laurence Proulx who has stated to the Bored Panda, that the idea of this came as the team had to create a bi-dimensional installation to maintain vehicle access across the street, but they wanted to give the street a topography, a volume. They used graphic technique of cubism to create the illusion. Furthermore, he stated that they did a 3D model of the topography and spheres with a simple pattern applied to the topography. Then they let the museum to match the colors and graphic patterns based on the exhibition identity.

The Moving Dunes was created with a long procedure next to the museum and it may became as a joyful artwork on the street and most of people are enjoying while walking on this Moving Dunes Street. According to the Charles Laurence Proulx, the total cost for this project is $ 50,000. Anyone who is passing by on this get to know the experience of this. These are some pictures which indicate the wonder of Moving Dunes.