HomeNature15 Photos of NASA that Show How Much Climate Change has Affected...
Nature 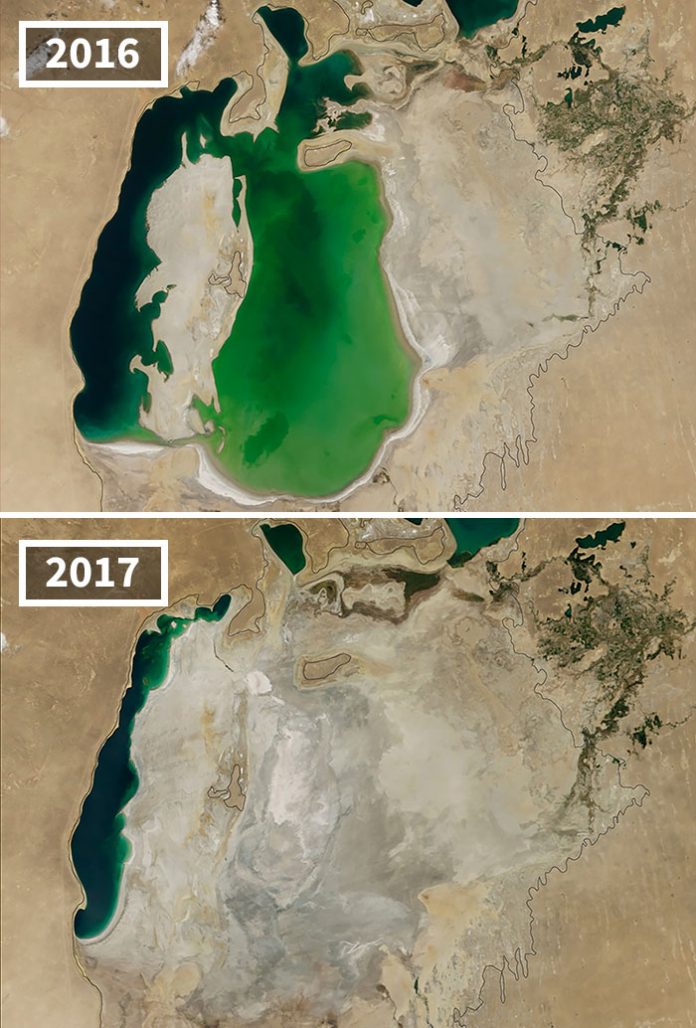 Climate change is affecting every area of the earth in many ways. According to the Demilked, the NASA has launched a project called Images of Change in order to understand what kind of effect climate change has done to the earth. The NASA has captured ever places which has been changing for many years due to climate change. Below pictures deeply shows the differences of some places around the world before and after getting affected by the climate change.

According to the first picture, Shrinking Aral Sea was the fourth largest lake in the world over many years. However, due to dry condition in 2014, the southern part of the sea became dry completely. However, this has caused very effectively in colder and hotter during the winter and summer seasons.

The third picture indicated a photo of the snow fell on the edge of northwest Africa’s Sahara desert captured in 2013 and it has been different as the snow has disappeared in some areas where they were in 1979.

The lake Poopo Bolivia was the second largest lake in many years and it has become dried up in recent time than it was before as indicated in the picture.

In the fifth, the picture of 1941 shows lower reaches of Muir Glacier. However in the photo taken in 2004 show some kind of difference than it was before as both sides of the glaciers have thinned substantially.

In the 6th picture, indicated the ice avalanche in Tibet’s Aru Range in which huge stream of ice and rock tumbling down a narrow valley due to the collapse of a glacier tongue in 2016.

In the 7th picture indicated the water level near full capacity in lake Powell, Arizona and Utah in 1999 and by 2014, the lake had dropped to 42 percent of water capacity with a drought.

8th picture indicated the shrinking glaciers in New Zealand. According to the Demilked, scientists at the Country’s National Institute of Water & Atmospheric Research stated that this change primarily to global warming and glaciers would not return to the previous sizes. The picture shows the different of the glacier in 1990 and 2017.

The 9th picture shows the changes of bearing sea ice at record low. The ice extent in 2018 was about 10 percent of normal.

The 11th picture indicate the beach erosion near Freeport Texa. The researchers from Netherland had found that changes in sandy beaches from 1984 to 2016. As showed in the Demilked, they found that 24 percent of beaches eroded more than 20 inches per year

#14 This picture indicates how extremely dry condition has led to major fires in North Central Australia.

#15 This picture shows the melt water on George Vi Ice Shelf in Antarctica.

30 OF Greatest Replies to #Trashtag Challenge